Providing a ceremonial kick off to the work that will transition the former “Edwin’s” store into the new home of the Franklin Food Pantry, supporters, friends and local officials gathered Wednesday in the lot the building shares with Liquor World and Bristol County Savings.

Food Pantry Executive Director Tina Powderly welcomed attendees, noting the long journey that the Pantry has been on. “Today is really about sort of the symbolic opening of this space,” she said.

“COVID-19 really laid bare for all of us what we're going to try to do in this building, we saw the long lines at food banks and the CDC really recognized food insecurity as a public health problem,” she said, noting that the White House actually is having their first conference on food health and nutrition since 1969.

“Some people might say, what does that really mean for us and Franklin, is there really a need here?”

She answered her rhetorical question by noting that 600-700 households in Franklin are receiving assistance that could be shopping with them. The town’s population is growing and, she said, “We have a little mantra in the pantry right now: `it's not about the building, it's about what we're going to do in this building,’” she said. One of the key things, according to Powderly is that the location and attractiveness of the property will reduce the stigma associated with getting food at a food pantry.

“We’re not going to be hidden away in an industrial park,” she said.

“These people who come to shop with us are the bravest people; they are taking that step of asking for help to care for the family and they deserve dignity,” said Powderly. She said the facility will include handicapped accessibility, bathrooms, and elevator and spaces to meet as well as spaces to provide privacy for individual consultation.

While there is no fixed timeline, Powderly said the hope is that the facility will be ready to begin operations by winter. Although the Food Pantry was forced to abandon its original plan to relocate near Walgreens on East Central Street, Powderly said much of the planning work done for that facility was readily transferable to the new location.

She then discussed the many supporters of the Food Pantry, funding help that came through Mass Development, a state agency, and a $50,000 earmark garnered by State Rep. Jeff Roy, whom she introduced.

He, in turn, saluted Powderly’s leadership and told the story of how he had to negotiate with Mass Development, which had been preparing a funding program based on the East Central location.

“I had run into the people from Mass Development just a few days after Tina had told me about the change in plans,” he said. “They were so excited to tell me, yes, Franklin was going get the $500,000 and I had to say, well that nice, except now it’s going to be in a different location,” said Roy. In the end, they did review the new location and saw its merits and provided the needed funding, he said.

As for the $50,000, Roy said that amount was in the budget last year “and I'm happy to report that there's another $50,000 in the budget for this year,” he said. “And I want to thank my legislative colleague, Shawn Dooley from Norfolk. “He saw the amendment in the legislation for the $50,000 for Franklin and asked, what can I do to help,” Roy explained. “I said, please sign on and also speak to your Republican colleagues and their votes so we can get it done,” and he did.

In his concluding remarks, Roy presented Powderly and the Food Pantry with a recognition from the legislature for the work they do.

After the remarks, Powderly and the Food Pantry team provided a tour of the interior and a discussion of how the building will be adapted to the work of serving Franklin’s food needs. 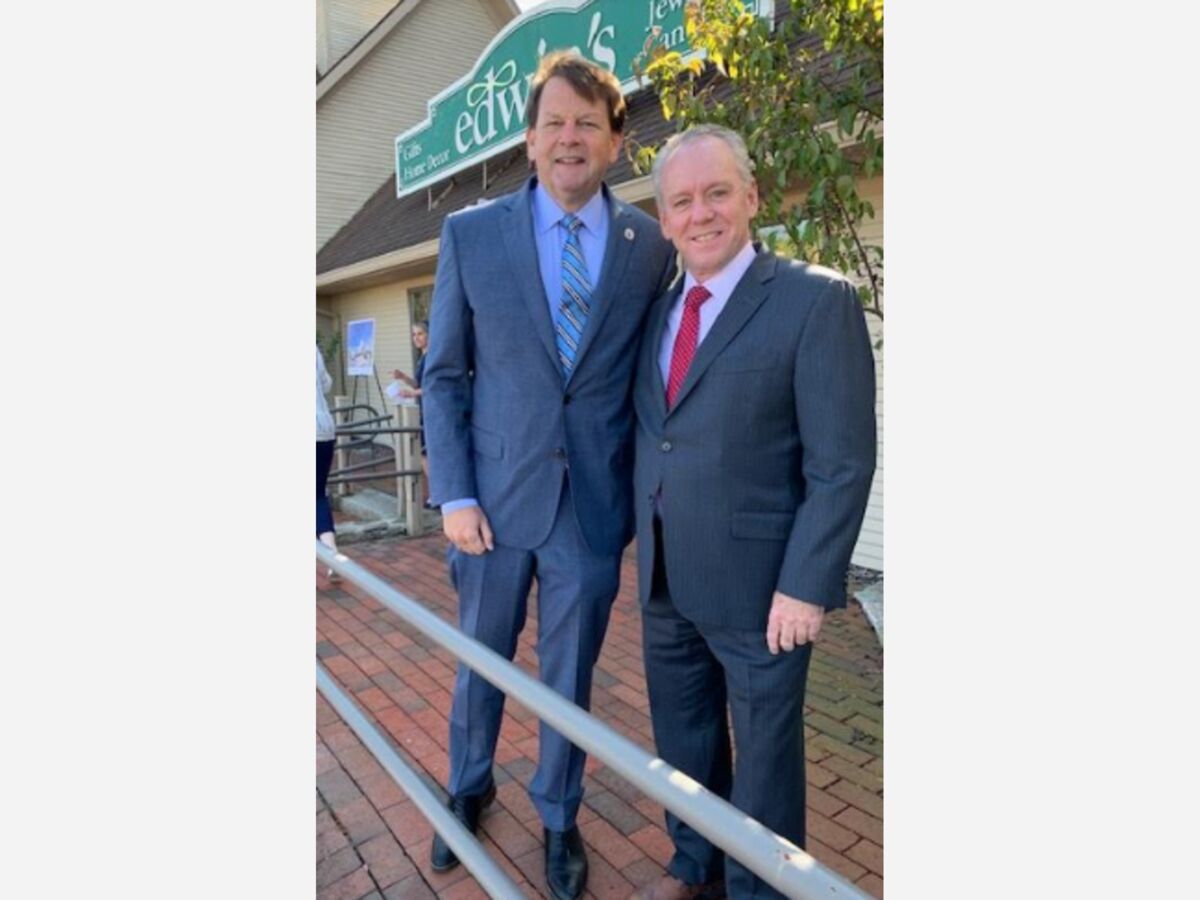